Editor’s note: This past summer, the Roberson Project on Slavery, Race, and Reconciliation was fortunate to have five talented and hardworking undergraduate research assistants working with us: Callista Abner, Sofina Behr, Plum Champlin, Lillian Holloway, and Carrie Schupack. We asked each of them to contribute to the Project blog some reflections on their work and experiences from the summer. The opinions expressed in the blogs are solely theirs and not necessarily those of the Roberson Projects. Our third post is by Sofina (Sofie) Behr, a junior Philosophy and Psychology major at Sewanee from Montgomery, Alabama.

The Legacies of Slavery: Acklen and Reparative Work

When I was interviewing for the Summer 2022 research assistantship with the Roberson Project, its director, Dr. Woody Register, looked at me through our Zoom screen and asked, “so, what are your thoughts on reparations?” This question was meant to see what I had thought about the complicated issue, but it made me realize how little thought I had previously given the topic. At that time, I wasn’t sure what my thoughts were on reparations. To this day, I’m still not fully satisfied with my ability to answer that question.

Reparations generally refer to compensation given to those who have experienced abuse or injury.i  In the context of the University of the South’s indebtedness to slavery, reparations would refer to damages experienced by victims of slavery and/or their descendants. In the national context, supporters of reparations have proposed a variety of actions, including but not limited to affirmative action, scholarships, individual monetary payments, and systematic initiatives.ii For victims of slavery and/or descendants of enslaved people, evidence of this disadvantage is indicated in the wealth disparities between Black and white Americans. For example, in 2016, researchers found that the “median black household net worth ($17,600) is only one-tenth of the white net worth ($171,000).” .iii While I was aware of these arguments before starting my internship, I hadn’t been directly exposed to a specific example of reparations for this disparity in action. Over the course of the summer with the Roberson Project, I was introduced to the story of the Acklen family and their descendants, and it has stuck with me because of its relevance to the discussion of reparations and generational wealth.

I encountered the Acklens’ story while working on a project with Dr. Andrew Maginn, the Roberson Project’s Senior Research Associate and Program Coordinator. We were trying to compose biographies of the original supporters of the University of the South. We are calling them the “Founding Funders.”  Joseph Alexander Smith Acklen (1816-1863) was a Mexican War hero and lawyer from Huntsville, Alabama. He and his wife, Adelicia Acklen, frequently surfaced in our research, and we quickly found that their family was connected to other “Founding Funders” with deep and troubling ties to slavery, such as Isaac Franklin and John Armfield. Isaac Franklin was Adelicia’s first husband, and his death in 1846 made her the wealthiest woman in the South.iv Adelicia was left with a fortune of almost $1 million, which included seven cotton plantations in Louisiana, a farm in Tennessee, and hundreds of enslaved people.v The one property that stood out to me was the Acklens’ West Feliciana property in Louisiana. The 1860 Slave Schedule of the U.S. Census reported that 659 enslaved people toiled on this property. This was a clarifying moment for me. I realized a reality about the university’s “Funders” and the Acklens specifically. They were not just representative of the institution of slavery. They were the institution of slavery. 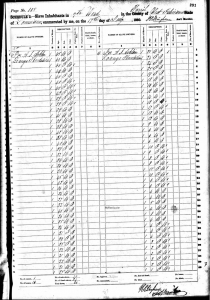 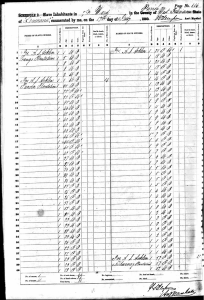 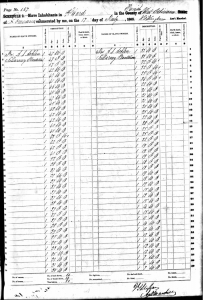 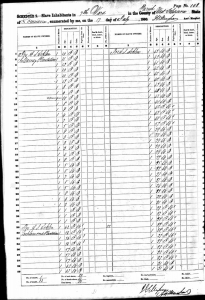 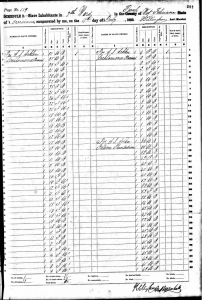 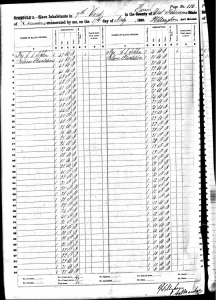 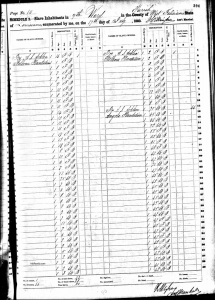 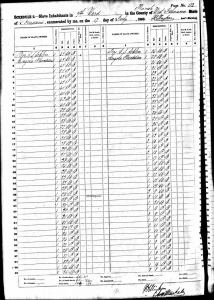 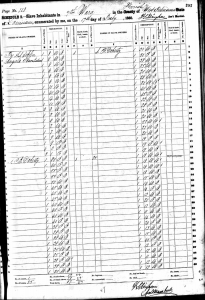 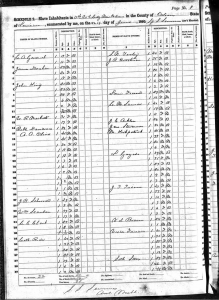 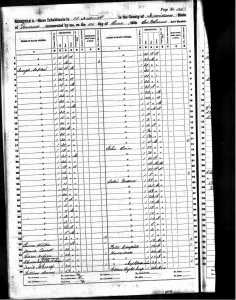 In late June, the Roberson Project Summer researchers visited the Belmont Mansion in Nashville, the home of Joseph and Adelicia Acklen. We were fortunate to sit down with a guide who provided some important insight into the legacy of the Acklen family and their wealth. He explained that Joseph Acklen’s knowledge and experience in planting assisted in the growth of Adelicia’s wealth, all through the enslaved labor at their West Feliciana plantation. Adelicia capitalized on this economic and social status by networking and connecting with other members of the southern aristocracy through lavish dinner parties and events at the mansion. Throughout the Civil War, Adelicia relied on her social status and connections to other wealthy planters to protect her fortune. As Union troops drew near Nashville in 1862, Adelicia traveled to New Orleans, where she negotiated the sale of her plantations’ remaining cotton for $960,000 in gold, equivalent to more than $16 million today.vi

According to records and information from our guide, the descendants today of the Acklens are the Kaiser family, who remain quite prominent and wealthy .vii The story of the Acklens and their Kaiser descendants is by no means unusual. While I knew that many slave-owning families had living descendants who benefitted from the generational wealth their ancestors created, I had never been exposed to a specific example. When we talk about reparations and the need for reparative work, it is often easy to remain comfortable engaging in abstract or theoretical discussions. In contrast, the legacy of the Acklen family, and the knowledge of the Kaisers as the descendants of the Acklens, made the discussion of reparative work strikingly concrete. The conversation no longer centered around the general talk of “descendants” or a family of forgotten or faceless names. Here was a family whose vast wealth has roots in the institution of slavery.

The Acklens’ story is one of the many stories exploring the legacy of slavery, and more specifically, the legacies of slavery in connection to Sewanee. Families like the Acklens built their fortunes with enslaved labor. However, they were able to maintain generational wealth due to a number of factors, not least of which was the socioeconomic status granted to them as members of the southern upper class. This wealth was not at all accessible to enslaved people and their descendants, and this lack of access to wealth creation is why the conversation about reparative work needs to be encouraged. After emancipation, former slave owners like the Acklens and their descendants were able to remain afloat, as their status and prestige remained and provided opportunities for financial gain. In contrast, freed people and their descendants had to build wealth, quite literally, from scratch. Here, it is clear to see the shortcomings of Reconstruction era policy and a disregard for this inequity in the last half century.viii While enslaved people did become “free,” they lacked the resources and the wealth many white families had used their labor and property value to accumulate over decades and across generations.

So what can be done to remedy the economic inequity faced by descendants of enslaved people? One answer to this question is located about five minutes away from Belmont Mansion. Down the hill from the Acklens’ estate is Freedom Plaza, which Belmont University dedicated in 2021.

Freedom Plaza, according to the University, serves to “celebrate and memorialize the lives of the enslaved individuals who are known to have labored on the estate owned by Joseph and Adelicia Acklen more than 170 years ago, prior to the establishment of Belmont College.”ix This sort of reparative work, sometimes called “symbolic reparations,” is important, but is not by any means sufficient in remediating the effects of slavery. In a report written by the United Nations Working Group of Experts of People of African Descent, the erection of “monuments, memorials, and markers” is recommended as a means to “facilitate the public dialogue.”x At first glance, I felt the Freedom Plaza achieved this goal. Upon further thought, however, I became less convinced that the dedication of the Freedom Plaza was anything more than a performative gesture. Freedom Plaza lists the names of six known individuals enslaved at Belmont Mansion. But in my view, that is precisely the issue with this example of reparative work: there are only six names.

Given what we know about the extent of the Acklens’ slave ownership, it is unlikely that only six individuals were enslaved there. Even more questionable is the fact that researchers working for the mansion could find the names of only six enslaved laborers and, it seems, were satisfied enough to place those names on the monument. While symbolic reparations like Freedom Plaza may “facilitate dialogue” among visitors to the mansion, there is something to be said about the effort and attention given to discovering and naming the enslaved. When I examined Freedom Plaza through this lens, it seemed limited in its impact. In the words of William A. Darity and A. Kirsten Mullen, authors of [insert title], memorials and plaques are useful in commemorating the enslaved and those who have fought for justice, but these acts on their own are mere “piecemeal reparations.” They do little to change the actual material conditions of slavery’s descendants.xi Darity and Mullen assert that the federal government enforced the institution of slavery until 1865, and thus the payment of reparations for the harm the national government caused is an American obligation.xii

Colleges and universities bear responsibility, too. Like Belmont University, the University of the South has deeply rooted ties to the Acklen family and the institution of slavery. (The Acklens pledged the enormous sum of $10,000 to the founding of the university.) In order not only to reckon with this reality but also to partake in actual reparative work, students like me as well as academic institutions as a whole must give greater thought to Darity and Mullen’s call to action: “Instead of seeking piecemeal reparations from their institutions on a one-by-one basis, activists should push these institutions to join the lobbying effort for congressional approval of black reparations.”xiii Honoring and recognizing the enslaved people whose property value bankrolled the founding of my university is important for us to do. We need to know that historical truth. But if we want to promote real reparations for the slavery that made our university possible, we have to go beyond these piecemeal steps. That, to answer Dr. Register’s original question, is what I am thinking about reparations.

Notes to the text:

The Roberson Project on Slavery, Race, and Reconciliation aims to bring together the Sewanee community — students, staff, faculty, alumni, and area residents — to pursue a comprehensive examination and thoughtful consideration of our university’s historic entanglement in the institution of slavery and its legacies in the long century of racial injustice after the end of the Civil War.

The title of our blog – the Latin for “of the South” – is drawn from the formal name that appears on diplomas awarded at Sewanee: Universitas Meridiana. Adopting  this prepositional phrase for our online publication expresses our position that this investigation and the understanding that we derive from it are essential in determining what it means to be a leading university of and for the twenty-first century South.

This blog will publish features drawn from our research and sponsored events in order to share with the larger public the work we are pursuing.

About our header image: The chief founders of the University of the South, including the Episcopal Bishop of Louisiana, the Rt. Rev. Leonidas Polk, all had long histories as both slaveholders and defenders of the slaveholding order when they launched the campaign for a university “of the South” in 1856. The header image of our blog is a stark indicator of these southern histories. It is cropped from an 1855 bill of sale for landed and enslaved property in Bolivar County, Mississippi, belonging to Bishop Polk and his son Alexander Hamilton Polk. The Polks liquidated their 2,700-acre plantation and its enslaved labor force to cover personal debts owed to a pair of merchants out of New Orleans. The buyer of the land and persons in this case was James H. Yerger, the sheriff of Washington County, Mississippi. The sale document shown here itemizes the names and ages of the enslaved persons sold by the Polks.